“And yet we all have known flights when, of a sudden, each for himself, it has seemed to us that we have crossed the border of the world of reality… Where there has come premonition of an incursion into a forbidden world whence it was going to be infinitely difficult to return.

Thus, when Mermoz first crossed the South Atlantic in a hydroplane, as day was dying he ran foul of the Black Hole region, off Africa. Straight ahead of him were the tails of tornadoes rising minute by minute gradually higher, rising as a wall is built; and then the night came down upon these preliminaries and swallowed them up; and when, an hour later, he slipped under the clouds, he came out into a fantastic kingdom. 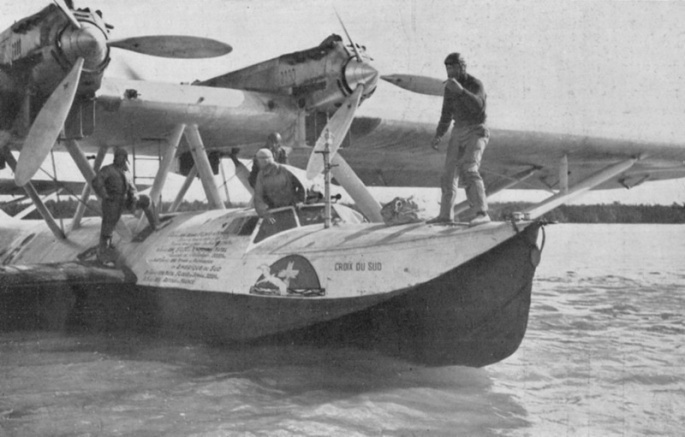 Great black waterspouts had reared themselves seemingly in the immobility of temple pillars. Swollen at their tops, they were supporting the squat and lowering arch of the tempest, but through the rifts in the arch there fell slabs of light and the full moon sent her radiant beams between the pillars down upon the frozen tiles of the sea.

Through these uninhabited ruins Mermoz made his way, gliding slantwise from one channel of light to the next, circling round those giant pillars in which there must have rumbled the upsurge of the sea, flying for four hours through these corridors of moonlight toward the exit from the temple. And this spectacle was so overwhelming that only after he had got through the Black Hole did Mermoz awaken to the fact that he had not been afraid.”

As with my last post about Guillamet, I’ve excerpted a bit of this wonderful little book. I’m not sure what message I’m trying to convey with this passage, mostly I just want to share something beautiful. I can’t sufficiently praise this memoir, which remembers a lifetime of adventure and friendship in a style both haunting and celebratory. May we all lead lives so rich, and leave behind a memorial so timeless.

Jean Mermoz, the subject of the above passage and the namesake of a mountain in Argentine Patagonia, was a French aviator who lived from 1901 to 1936. He pioneered many air routes in Argentina and Chile, and is remember as one of the leading pilots of his era. Along with four crewmen, he was lost while crossing the Atlantic between Senegal and Brazil.

In the story that follows, Graham Zimmerman and I climb the Argentina Route on Aguja Mermoz. I instinctively want to make some self-deprecating comment here, about how our little adventures pale in comparison to the real explorers of days past. But I’ll refrain for now, and simply note that experience is subjective; there’s no objective metric of “adventure”; and anytime we set out to map the frontiers of our own abilities, we do so with the smiling support of our predecessors.

Graham and I called it quits on our single-push attempt on Fitz Roy, twenty minutes after leaving basecamp.

We’d left our tent in pre-dawn darkness, but instead of the refreshing bite of crisp night air, we set out through a strangely warm, almost soupy, atmosphere. Stepping off the bedrock of camp, onto the Guillamet Glacier, we sank into mashed-potato snow. 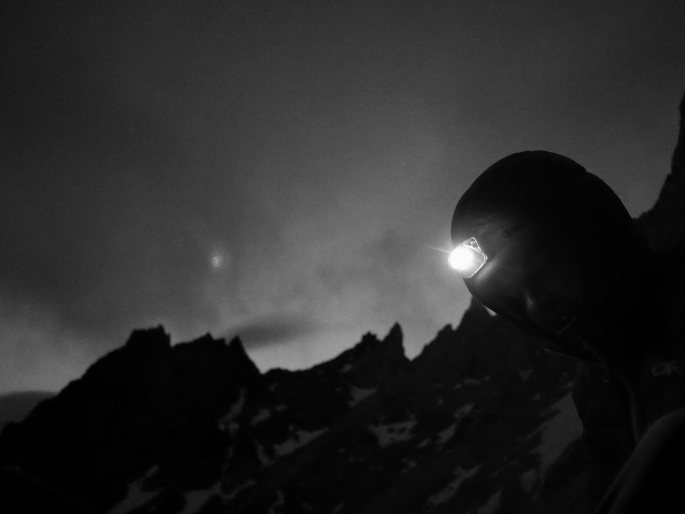 After gamely slogging a few hundred meters, we stopped to reconsider our plans. Ambitiously, we had dreamt of a long push up the California route on Fitz Roy. This would require much walking on the horrible snow, however, and the warm conditions might present objective hazards. We grudgingly decided not to fight with reality, and (in true Graham Z fashion) “re-stoked” for another objective: the Argentina Route on Aguja Mermoz.

Familiar with this zone, having climbed on the West Face of Guillamet a week earlier, we opted to use the Geordani Ridge to access the West Face of Mermoz. See my previous post about the various approaching options in the area. 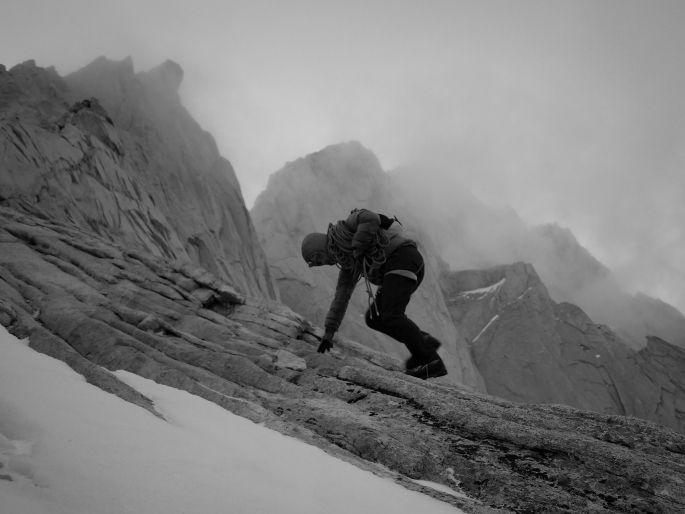 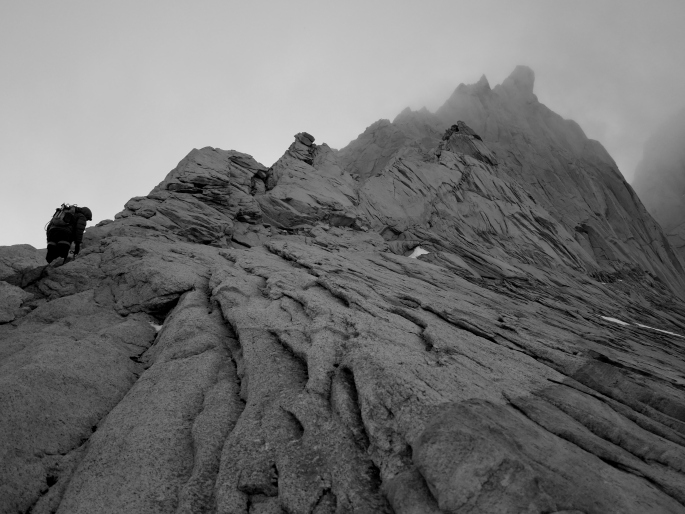 “Do you think the Wall of Hate is coming towards us?” Graham asked as we hung at a belay, a few pitches up Mermoz. To the west, thick clouds did indeed obscure our view of the next range and the icecap beyond. “I dunno, I’ll shoot some photos while you climb,” I answer, eager to see Graham off on the next pitch. I lined up Aguja Pollone in my viewfinder and snapped a shot. Thirty minutes later, as Graham neared the end of his lead, I framed the same shot and snapped again. Comparing the two, it didn’t look like the wall of clouds was advancing. Rather, it swirled and condensed, perhaps driven by the respiration of the Earth itself.

It seems to be a universal human proclivity, the attribution of emotion to non-human entities. We looked west and saw intention in those masses of water vapor; malevolence in the meteorology. Like all biases and blindspots, these tell us more about ourselves than the forces we stubbornly anthropomorphize. 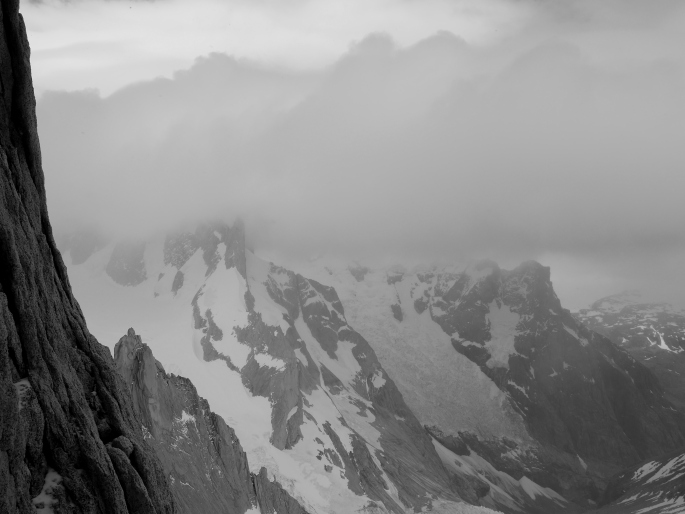 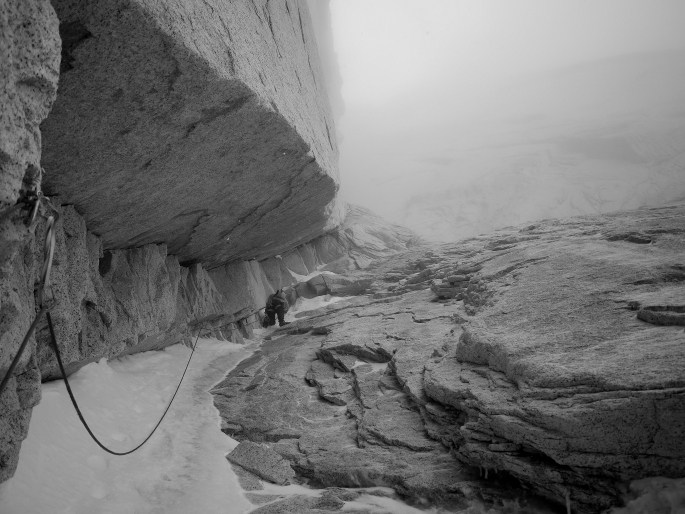 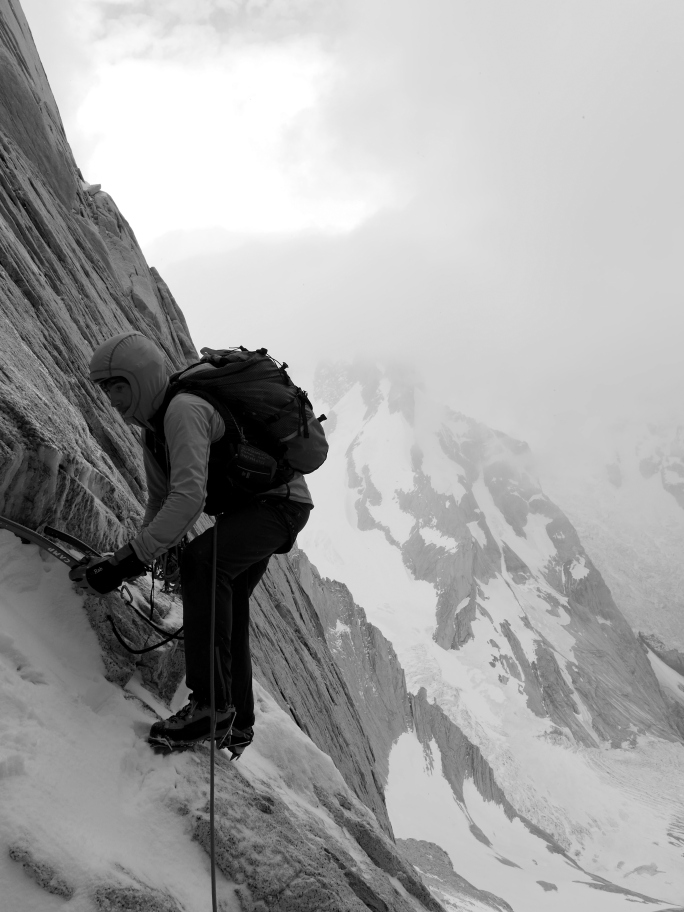 Higher, we swapped boots for climbing shoes and delicately navigated up a complex of flakes and cracks. Not having any beta on this route, we relied on old pitons to keep us on track. 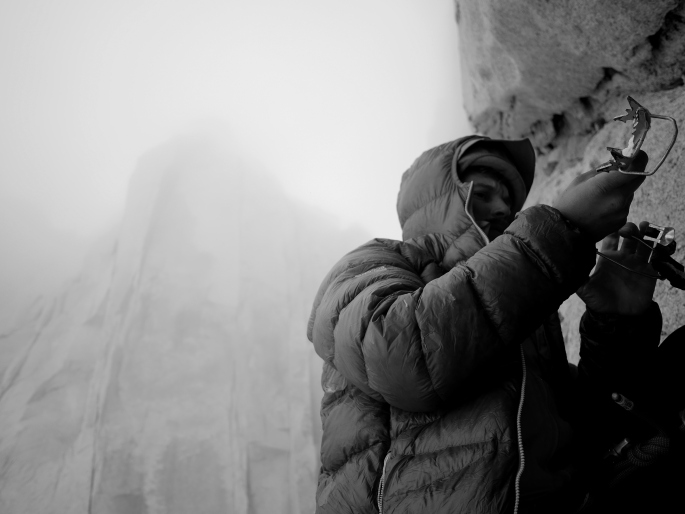 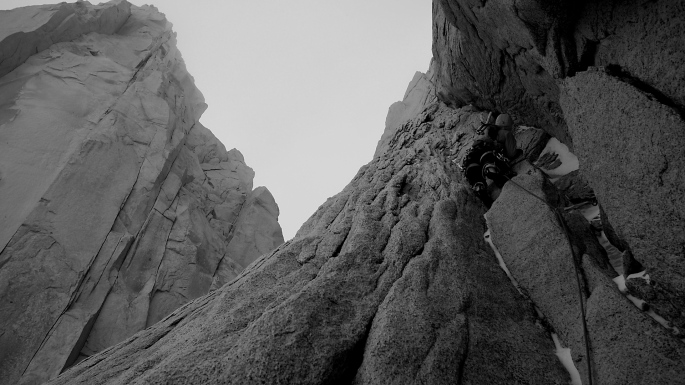 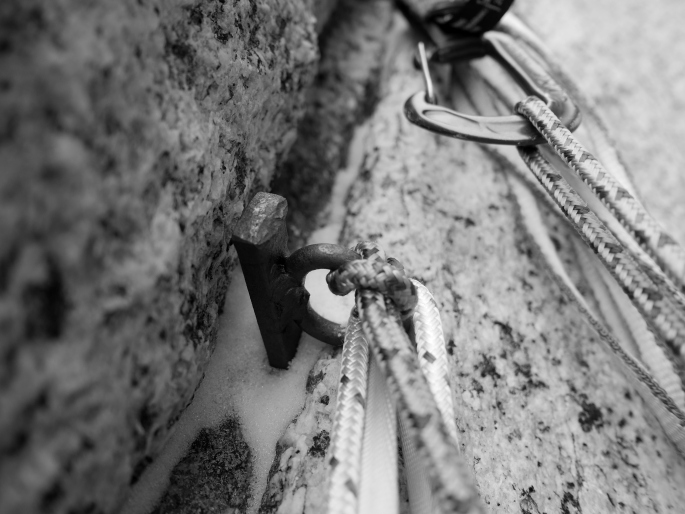 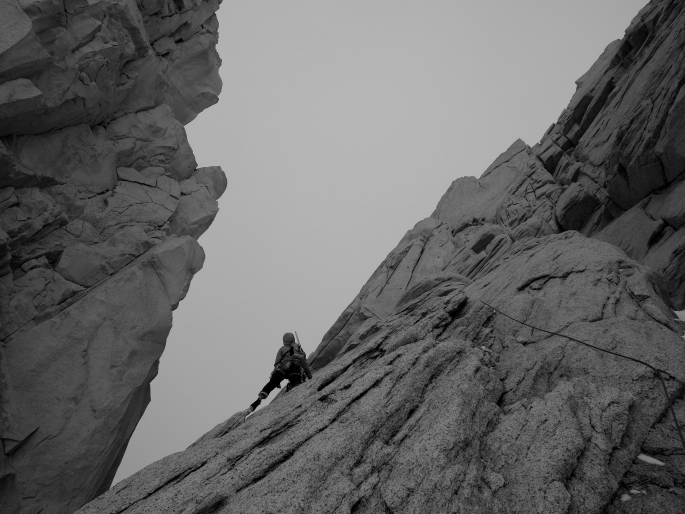 As we gained the summit ridge, the clouds broke. The rock firmed up, and we rode the clean crest of this granite wave in high spirits. 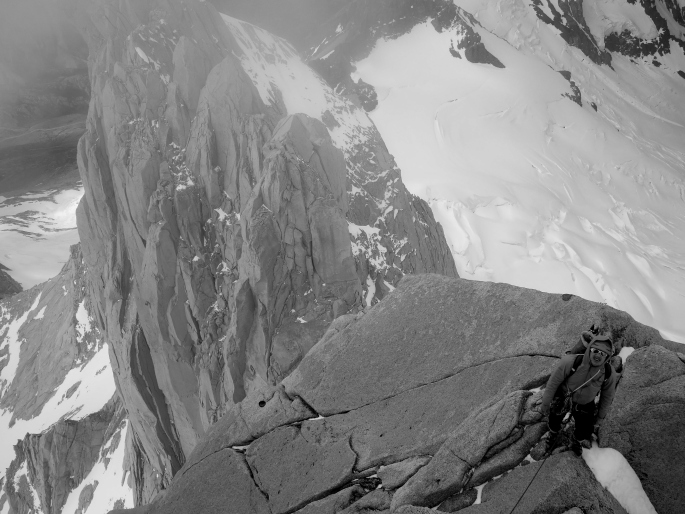 From the summit, Fitz Roy appeared briefly through the clouds. It seemed absurd that something so massive could come in and out of view so rapidly. 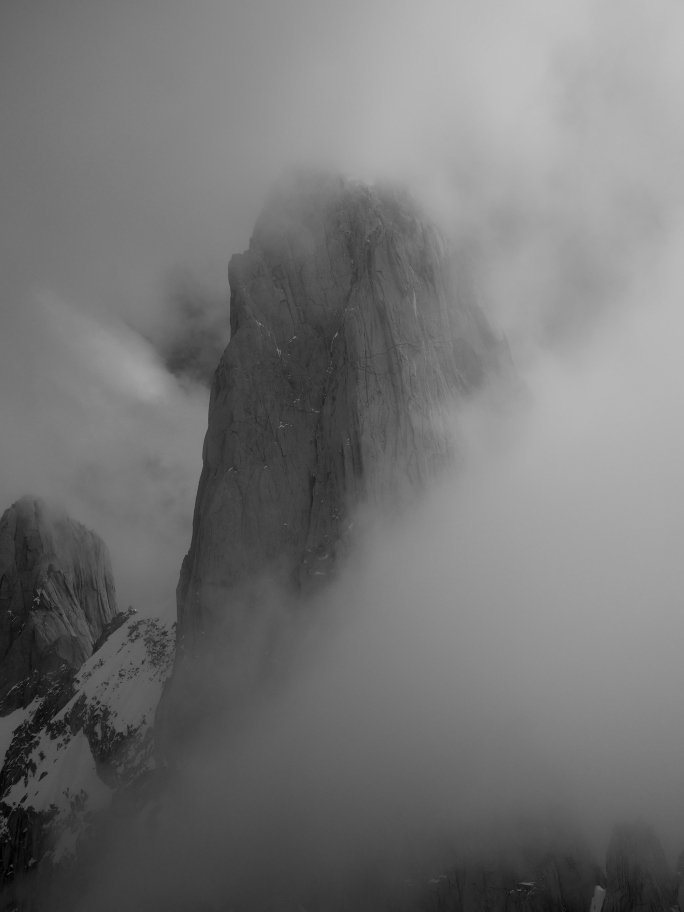 While descending, we of course congratulated ourselves for “listening to the gods” and making the smart decision to bail on the Fitz Roy plan, accepting a smaller objective for a shallower weather window. Consciously, I know that the climate is a deterministic, insentient system; it’s rules are complex, but theoretically knowable. The ways in which our subconscious interprets our environment, however, draw on powers of observation and wisdom that are sometimes inaccessible to our conscious mind. These subconscious impressions are often communicated through emotion and feeling. It is not, therefore, irrational to have a reverence and respect for the “spirits” of nature, be they gods, ghosts, or Gaia herself. What we are truly acknowledging is the collective wisdom of ourselves and our ancestors, expressed though our common language of wonderment.

Huge congratulations to Graham Zimmerman and Mark Allen for their nomination for the 2013 Piolet d’Or! This is highest honor that we alpinists can bestow on our peers, and these fine gentleman are truly deserving. Good luck in France!!

My ideas about the conscious and subconscious, and the communication between the two, come in large part from the book “Incognito”, by neuroscientist David Eagleman. I highly recommend it.

Finally, I want to close this post by mentioning the late great Chad Kellogg. For all of us that dream and aspire, you were an inspiration. You will be remembered… you will be missed. There are many tributes out there, written by folks who knew Chad better than I did. Here’s a short but evocative memory from my friend Blake Herrington.

Huge thanks to the folks that support me with the best equipment in the world: